"I couldn't wait for success so I went ahead without it." These words spoken by Jonathan Winters continue to resonate in my mind as I plan my short and long term goals. Of all collegiate athletes only 1% will ever play professionally, only .03% of Americans will earn $1 million annually, and only 29% of Americans will graduate from a 4-year university. Though I, nor Jonathan Winters know the secret to success, the individuals that have achieved it that I know personally have all "TRAVELED THE ROAD LESS TRAVELED". They are willing to do the things that others are not in order to achieve their goals. They have a VISION. Knowing exactly what we are working towards is the first step. Proverbs 29:18 states that "Where there is no vision, the people perish." Creating a vision of the end result allows us to mark our progress along the way. It is difficult to remain encouraged if we do not take the time to notice mile markers as we pass them. We must relish in small victories, because their accumulation is what ultimately leads us to our destination. Having a keen eye set on our destination also prevents us from detouring on routes that "look" similar to the one we are traveling. Our vision allows us to be patient enough to wait on the right exit because we have already estimated the travel time. The most successful individuals I know have an ATTITUDE of success. Our attitude determines how we approach each situation. It determines whether we are willing to stand up against the giants that currently occupy "the land of milk and honey" like Joshua and Caleb. Our attitude shapes our perspective of the experiences we encounter. It is the difference between seeing construction on the road as a dead end or an opportunity to find an alternate route in order to have options for the trip home. We have to be determined to reach our destination regardless of circumstances. If adversity is not a part of our vision, then it is merely a fantasy. We can not be afraid to PUSH THE BOUNDARIES and be unorthodox. A couple days ago my dad shared with me his opinion of tradition. "You can throw tradition outdoors somewhere for all I care!" LOL!!! We must have the ability to adjust and push ourselves further than ever before. If we continue to do what we have always done, then we'll continue to get what we have always gotten. We are all gifted with some form of creativity, we must discover it and put it to work. The road to success is less traveled for a reason; it requires SACRIFICE; whether it be time, money, or even people. It costs more to travel across country than across town. It is lonely at the top because although everyone wants to be successful, very few are willing to do what it takes. We miss out on spending time with friends and family, it often costs money to get to where we are going, and some people even have to be removed from our lives if they are not headed in the same direction. We can not make it to New Orleans by traveling with people headed to Mobile. Lastly, we must UNDERSTAND OUR ADVERSITY. We must overcome it, learn the lessons from it, recognize the strength we gain by going through it, and let our testimony serve as encouragement to others. "Success is not measured by where a person makes it in life, but by the adversities they overcome to get there."
Posted by Unknown No comments:

I am a FATHER

Every daddy is NOT a FATHER. The term FATHER carries prestige, which requires responsibility and accountability. I am one that can say that I have a FATHER who represents every aspect of the word and is my role model for how I raise my son. Any person that creates life is a daddy, but those special ones who nurture it are FATHERS. In many cases, the FATHER that nurtures is not always the daddy that created, but nonetheless they are FATHERS. Our Heavenly FATHER provides us with examples of how we are to be with the children that He entrusts to us in the way that He loves us. He protects us (II Samuel 7:9), provides for us (II Samuel 7:10), offers guidance (Proverbs 11:14), as well as, administers correction when needed (Proverbs 15:10). He gives us unconditional love as a blueprint for us natural FATHERS to follow. During summer breaks while in school my FATHER would find odd jobs for us to do in order to teach me how to work and how to value a dollar. He generally ended up giving me the majority of the money because his main purpose was to teach me to how to work for a living, the value of hard work, and to do all that I can for myself. Most of my peers would say that I was spoiled growing up, but I beg to differ. I worked for everything I got. I had to spend my summer days roofing, doing remodeling work, cutting grass, etc to get the things I wanted. From these experiences I gained the will to work in order to be self sufficient, and now to provide for my son. I also remember my FATHER and I traveling through bad weather when our vehicle hydroplaned across the median of the interstate, but by the the grace of God we barely missed the 18-wheeler that we were on a collision course with. Because the incident happened so fast I think I forgot to become afraid (LOL) but one thing still stands out as clear as day to me; my FATHER reaching across the vehicle to shelter me from any potential danger that would lie ahead. He showed that he valued my life more than his own. That love was instilled in me that moment and I carry it with me now towards my own son.Yet, even though he loved me enough to shield me from any harm that could have resulted from an accident, he has purposefully administered some pain as well.... yeah I have gotten a few whoopings.... and yeah I mean whoopings, not whippings. On October 1, 2010 a 6 lb, 11oz, 21-inch boy named Brayden Makhi Massey was entrusted to me to protect, provide for, guide, and chastise when necessary. I remember the day like it was yesterday. I received a call around 11p.m. from his mother telling me that she was going into labor and was headed to the hospital. I sat in the room drinking coffee to keep from dozing off until the contractions became more frequent, and Folgers was no longer needed. Around 5 a.m. I, along with his grandmother, great grandmother and great GRANDFATHER, stood watching the birth of my son. Though I was too nervous to cut the umbilical cord (LOL) I did put on his first diaper and took the first picture holding him. I fell in love at that very moment and vowed that I would do everything in my power to ensure his safety and that all of his needs were met just as my father has done throughout my life. Likewise, Brayden has gotten his hand popped a time or two for being disobedient. I do it because I love him and do not want anything to negative to happen to him that I can steer him away from. It takes a FATHER to teach a boy to become a man, and I was blessed to see many faults within myself before he was ever born and had a chance to correct them. Whether you believe it or not, parents are their children's biggest role models. Now I face the battle of breaking him from being a "mama's boy." I love that fact that he loves his mother but also understand that a boy must grow up and toughen up. It is my duty to show him how to be a gentleman and treat women with respect. I also want a little girl later in life and then it will be my duty to provide her with an example of the type of gentleman she should look for. It takes a special man to be a FATHER and I embrace it more and more everyday. I hope more men will step up to the plate and be the influence that every child needs and be deemed worthy of being called a FATHER. I am a FATHER.

Focus on the IMPRESSION rather than the appearance 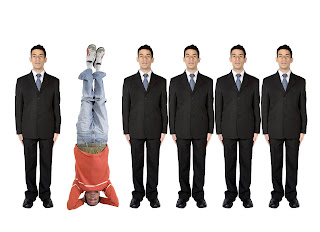 Kanye West said it best "the prettiest people do the ugliest things." This is because the outward appearance of a person can be beautiful even if their IMPRESSION is hideous. Appearance differs from IMPRESSION in the fact that it is outward while our IMPRESSION is inward, not only in its reflection of our inward self but also in what it cause others to inwardly think of us. A lot of us settle for only making our appearance pleasant because it tends to take less effort than working on our IMPRESSION, which is determined by our character. Proverbs 16:32 says "He that is slow to anger is better than the mighty, and he that ruleth his spirit than he that taketh a city." This tells us that our IMPRESSION is the most important aspect our lives. It is the true us; the things we value, our attitude, and inclinations. Focusing on our appearance will allow us to settle for merely looking like we are doing something, but placing priority on the IMPRESSION we make will hold us accountable for actually painting the very picture we are trying to portray. In Proverbs 22:1 it says that "A good name is more desirable than riches, to be esteemed is better than silver or gold." In other words, a good IMPRESSION is something that money can't buy, it's priceless, but for everything else there's Mastercard LOL! Our appearance only takes us as far as the eyes can see, but the IMPRESSION we make on others affects how they feel in their hearts about us. Many of us prejudge others and form opinions of the type of person they are just from their appearance. The type of clothes they wear, piercings, tattoos, weight, etc are all things that lead to us create an idea of who a person is. I'm sure laziness is one of the first attributes associated with someone who is overweight, whereas being professional is a trait often attributed to people who dress the part. The funny is, neither one is necessarily true. That overweight person could have the misfortune of inheriting a thyroid condition that affects their weight, and the person in the suit could be lazy, tardy, and does not follow any moral or ethical code of conduct. But, if we allow people to make an IMPRESSION on us it will eliminate any preconceived notions we have about them. We can make the mistake of passing up on people or things because they do not look the part and miss out blessings reaching for "fool's gold." Time is the tester of all things and if you give anyone of thing enough of it, its true character will surface. So be sure focus more on the IMPRESSION than the appearance.
Posted by Unknown No comments: